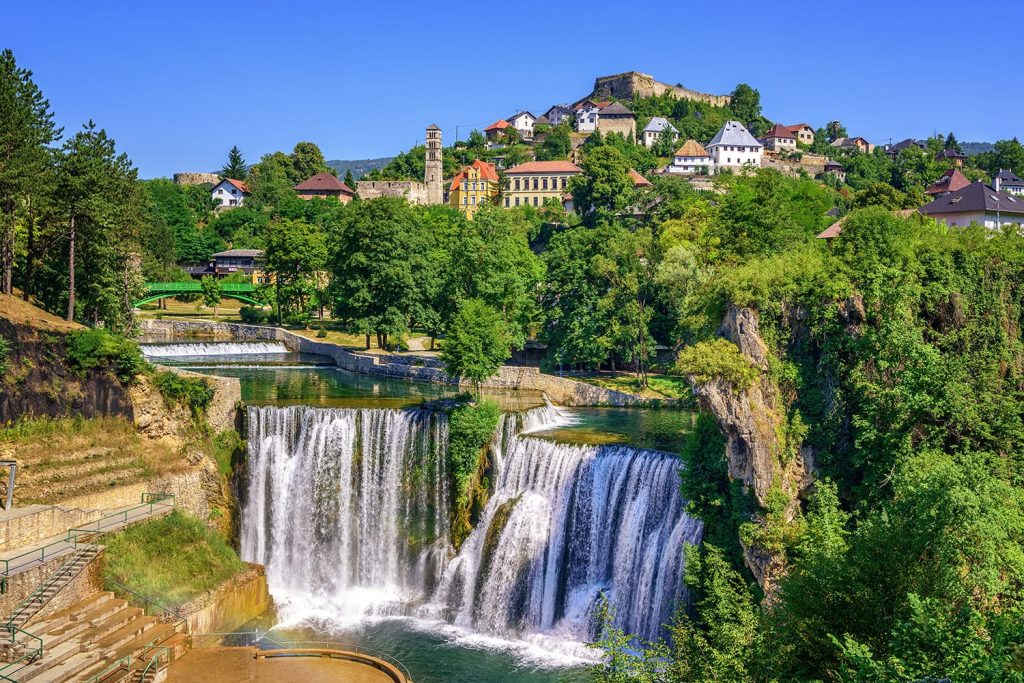 Sarajevo, which is often overlooked when planning a trip around Europe, is home to a fascinating blend of cultures and deeply important history. One can easily spend a couple of days in Sarajevo and after that, the city makes for an ideal base from which you can explore other parts of Bosnia and Herzegovina. To give you a better idea, here are some of the best day trips from Sarajevo.

How to Get Around

Although many of the day trips mentioned below can be done by public transport, consider renting a car for the day to give yourself more flexibility and independence. Your own four wheels allow you to be in control of your time and schedule, and depending on how many people are in your group, renting a car might even work out cheaper than other forms of transportation. You can compare car rental deals and find the cheapest prices at Rentalcars.com, an aggregate site that searches and displays prices and availability from hundreds of car rental companies so that you can be sure of getting the best possible car for your budget

Don’t want to drive or deal with the hassle of public transport? No worries, we have listed the best tour for each day trip (where available).

Perhaps more popular than the capital itself, Mostar is undoubtedly one of the most common Sarajevo day trips. Begin your visit by heading into the city’s charming Old Town which is full of old stone houses. It won’t be long before you come to Mostar’s main attraction, the Stari Most bridge. Rebuilt in 2004, the bridge not only offers great views along the Neretva river, but is also a great spot to join the brave locals and jump into the cool waters below. Next, follow the eastern bank of the river to Mostar’s Old Bazaar and up to the Koski Mehmed Pasha Mosque. The gardens there offer a great view along the river to Stari Most letting you see exactly why Mostar is so popular.

Getting there: There are several buses each day that take around 2 hours 45 minutes to get from Sarajevo to Mostar. Mostar also happens to be one of the most common day tours from Sarajevo and with a guided tour you can often visit several other destinations as well.

When it comes to the best side trips from Sarajevo, the small and historic city of Travnik is near the top of the list. Once the capital city of Bosnia during Ottoman rule, Travnik’s appearance hasn’t changed much since those days. Start with a walk through the city’s Old Town to see many of its traditional houses and several significant local mosques. It is then time to head up to the 15th century fortress that watches over Travnik. The fortress is the best preserved in the country and is home to a local ethnographic museum. Back in town, be sure to stop at the Many-Coloured Mosque, also known as the Sulejmanija Mosque, for its architecture and restored facades.

Getting there: Regular buses travel from Sarajevo to Travnik, with the journey lasting just under 2 hours. Visit Travnik with a guided tour if you’d prefer to have someone explain the significance of the places you’re visiting.

Though not as well known, Jajce is definitely one of the best places to visit in Bosnia and Herzegovina. You need only take one look at the mighty Pliva Falls as you arrive into town to know it’s a special place. Having admired the raging waterfall and its city backdrop, head across the Pliva River and walk into the historic town center. As you slowly wind your way up the hillside, stop at the well preserved Jajce Catacombs which were built for medieval kings. At the top of Jajce’s hill, you’ll reach Jajce Fortress, a castle from which Bosnia’s medieval kings once ruled. If you have time, leave town and venture west to the lovely Pliva Lakes where you can see the picturesque Watermills of Jajce along streams that join the lakes.

Getting there: There are fairly regular buses that go from Sarajevo to Jajce and the ride takes around 3 ½ hours. If you don’t want to worry about navigating public transport, you can also visit as part of a guided tour.

Easily one of the best things to see in Bosnia and Herzegovina outside of Sarajevo are the majestic Kravica Waterfalls. The Balkans are known for their many beautiful waterfalls and the Kravica Waterfalls are one of those. Located between Mostar and the Croatian border, the falls are set within a tranquil forest setting. The broad tufa cascade is spread out across a long ridge and has a drop of 25 meters into a large lake at the bottom. Besides being spectacularly scenic, it’s also possible to swim in the lake during the warmer months, which can be a nice opportunity to cool off.

Getting there: You won’t find any public transport going from Sarajevo to the Kravica Waterfalls, so you’ll want to look into taking a guided tour to get you there.

Despite its small size, the town of Konjic, just a short trip from Sarajevo has a few things up its sleeve. Sitting on the Neretva River and surrounded by mountains, Konjic’s beautiful location gives it a secluded atmosphere. Once in the town’s historical center, it won’t take long to spot the star attraction, the Stari Most bridge. Wonderfully scenic, this bridge, which runs across the Neretva River, dates back to the 17th century. The other big attraction tied to Konjic just a few kilometers out of town is the ARK D-0 Bunker of Josip Tito. Known as “Tito’s Bunker”, this secret Cold War shelter was built for the then Yugolsav President and can now be visited on a guided tour of the complex.

Getting there: There are buses roughly every hour to Konjic from Sarajevo, and the journey takes around 1 hour 20 minutes. You can also visit Konjic together with other destinations as part of a guided tour.

In July 1995, 8,372 Bosniak men were executed by the Army of Republika Srpska in what became known as the Srebrenica Massacre or Srebrenica Genocide. Travelling to Srebrenica allows you to learn more about this dark yet recent history of Bosnia and Herzegovina. You can visit the modern Museum of Srebrenica Genocide, located in the former Dutch headquarters of their UN forces, and learn about this mass murder through first-hand accounts. You’ll also learn more about the history of Yugoslavia to help give some context to this grisly event and visit a memorial that remembers its victims.

Getting there: There is no public transport to get from Sarajevo to Srebrenica, so your best option is to visit with a guided tour.

For a dose of culture and history, head to the city of Višegrad in the eastern reaches of the country. Visegrad is best known for its literary connection to the Nobel Prize-winning novelist Ivo Andric, who featured the city in his acclaimed novel The Bridge over the Drina. The book’s title refers to the city’s Mehmed Paša Sokolović Bridge which crosses the Drina River. Built by the Ottomans, the bridge is not only the main attraction of Visegrad but also one of Bosnia and Herzegovina’s three UNESCO World Heritage Sites. The local adoration for Ivo Andric has led to the city’s other big attraction, Andrićgrad, essentially a small theme park dedicated to the author’s works. Boasting architecture from different periods of Visegrad’s history, it helps you understand both the novelist and the city.

Getting there: Traveling from Sarajevo to Visegrad by public transport is impractical, so unfortunately your only real option is to drive yourself there or book a private tour.

Bosnia and Herzegovina has its fair share of peaceful and secluded spots, but Lukomir has the honor of being the country’s most remote village. Resting on the side of Mount Bjelašnica at 1,495 metres, Lukomir is the highest village in the country. Thanks to its isolated nature, it hasn’t changed a bit over the centuries and so visiting feels like you’ve taken a step back in time. Lukomir is treated a little like an open-air ethnographic museum where you can see traditions and the heritage of rural life on display. This ranges from old stone houses in which people live to the agriculture which they live off. It’s worth noting that because of its elevation, snow and ice makes the village inaccessible during winter.

Getting there: Due to its remote location, there isn’t any public transport that reaches the village of Lukomir. To get there you’ll need to drive, and you’ll need an off-road vehicle because of the road conditions.

In Bosnia and Herzegovina there is a place where you can visit that is known as the “Bosnian Pyramids”. Found outside the town of Visoko are a cluster of five hills that are shaped like pyramids. The idea that these hills may actually be pyramids sounds far-fetched, but that is what Bosnian businessman Semir Osmanagić claims they are. The hills have since been given names to that effect like “Bosnian Pyramid of the Sun“. Despite these claims, the scientific and archaeological community has widely agreed that there is no substance to this theory. However, that doesn’t make them any less interesting to see in person, even if they are only hills.

Getting there: Regular buses travel from Sarajevo to the town of Visoko, the trip takes roughly 40 minutes. From Visoko it’s then about a 40 minute walk to reach the “pyramids”. You can also take a guided tour to the Bosnian Pyramids.

Book Tour to the Bosnian Pyramids

To enjoy a day out among the beautiful countryside of Bosnia and Herzegovina, it’s hard to beat Sutjeska National Park. If you’re looking for untouched forest, and epic mountains, this is the place to find it. Sutjeska National Park is the country’s oldest national park and is home to Maglić, the highest mountain in Bosnia and Herzegovina. Thanks to its isolated location by the border with Montenegro, Perućica which is also part of the Sutjeska National Park, is one of Europe’s two remaining primeval forests. Since it’s such an incredible outdoor playground, the most common things to do in the national park are to go hiking and mountain biking.

Getting there: Again, thanks to the isolated location of Sutjeska National Park, there are no public transport options to get there. You’ll need to drive yourself to reach it from Sarajevo.

As you can see Sarajevo makes a great base from which to explore the rest of Bosnia and Herzegovina, and the above are just a few of the best places to visit from Sarajevo.